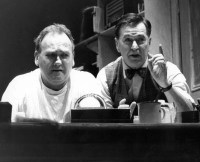 In his introduction to the script, Ronald Harwood says that The Dresser is not the story of his time as dresser to Sir Donald Wolfit, one of the last actor-managers that operated in England. He says that although there are parallels that can be drawn, it is more the story of what was the British theatre from the early 18th Century until the late 1930s, and I agree with him.

Further, I feel the play closely parallels William Shakespear's King Lear. In The Dresser, the 3 female roles can be closely compared with Lear's 3 daughters. None, save perhaps Irene (who anyway has her own purpose to pursue), shows compassion to the ailing Sir. All push, drive and contrive to get something from him. All this contributes to his worsening state, as is the case with King Lear. To me, Norman is the Fool of King Lear, Mr Oxenby, the conniving Edmund, Geoffrey Thornton, the ever loyal Gloucester.

Sir steps in and out of his state, as does King Lear. King Lear re-discovers himself towards the end of the play. He realises that all is lost, except perhaps for his knowledge of himself. Sir does not however, and this can also be seen as a great tragedy. 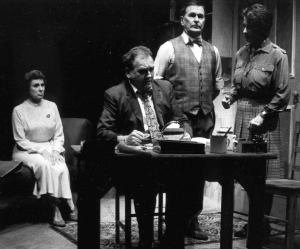