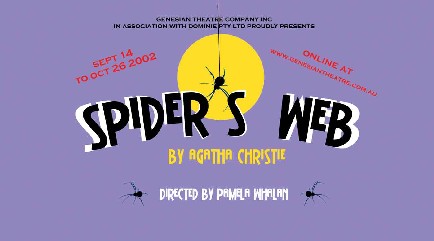 Clarissa Hailsham-Brown is a charming woman but she has a problem - when she tells the truth nobody believes her - although the whole world wants to believe the fantastic web of lies she is capable of weaving. Can this problem be turned to advantage when a man is murdered in her living room and she tries to shield a possible murder suspect?

Dame Agatha Christie applies her light and expert touch to a murder mystery that will both puzzle and entertain the audience. Follow the clues and fall under the charm of Clarissa as she weaves her tangled Spider's Web.

Come and enjoy the work of Agatha Christie at her best.

Spider's Web opens at the Genesian Theatre, 420 Kent Street, Sydney on Saturday 14 September and runs until Saturday 26 October for a season of Friday and Saturday evenings at 8.00 p.m. and Sundays at 4.30 p.m.