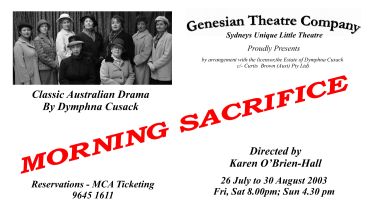 Australian writing legend Dymphna Cusack (Come in Spinner, Caddie) was a schoolteacher for twenty years, but considered these years a waste of time! 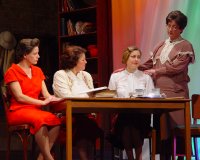 Despite top credentials testifying to her teaching ability, in the early 1940's, Cusack was banished to the bush, by the Department of Education, where she was made supernumerary, given no examination responsibilities, told to fill in for other teachers when they were ill and make the morning tea.

Morning Sacrifice, set over three days in the staff room of Easthaven Girls' School, is said to be Cusack's revenge on the Department as it exposes the hidebound education system of the 1930's. Nine teachers, a mix of conservatives and progressives, play office games and struggle for favouritism, while an unnoticed tragedy unfolds around them.

First performed in 1942, Morning Sacrifice has since become a classic of Australian theatre.

Director, Karen O'Brien-Hall; Set Designer, Grant Fraser; Lighting Designer, Michael Schell and Sound Designer, John O'Brien-Hall have collaborated to use the heritage features of The Genesian Theatre, to create a setting in total emphathy with Dymphna Cusack's play. Even long term patrons of the Genesians will see their stage area in a new light! 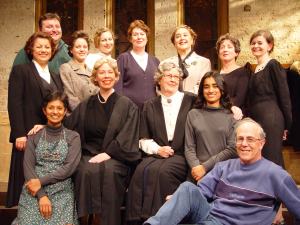