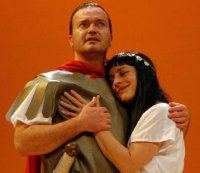 Antony and Cleopatra is a famous love story of Roman times.

However, Shakespeare's text of the play also brings to life the great rivalry between Mark Antony and Octavius Caesar. These two men were vying for control of the Roman senate after the death of Julius Caesar - Octavius being the nephew of Julius and Antony, a highly popular Roman general.

We see Octavius' star rising as Antony's fades through this obsessive love for the capricious temptress Cleopatra, Queen of Egypt, who draws Antony away from his Roman responsibilities.

Caesar and Antony with Cleopatra between them constitute the power struggle, which is the central theme of the play.

Some careful, judicious editing presents the audience with a good tight story and much of Shakespeare's beautiful language to enjoy. 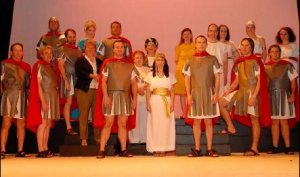