The Director: A Play About St Genesius 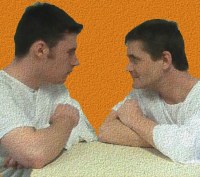 This year the Genesian Theatre is proud to participate in World Youth Day 2008 by presenting two one act plays 'The Director' and a selection of the 'Medieval Mystery Cycles'.

The Director, a new piece from writer/director Rebekah Jennings, tells the story of Genesius, an actor who was martyred in 303A.D, half way through a performance, for converting to Christianity. The story is related by the director of the show who is thoroughly annoyed that he's lost his lead actor and like many of us, cannot understand the choice that Genesius has made.

The show is a two hander between the young, idealistic director who hopes to make his name and fortune in Rome and his older self who has never 'made it', and blames Genesius for his failure.

The Director deals with questions of faith, the reason behind suffering and the frustrations of theatre.

For something completely different the second performance of the evening is a selection of Medieval Mystery Cycles. In the Middle Ages stories from the Bible were acted out in the churches as a way of making them more memorable for a largely illiterate population. As both the popularity and the bawdiness of the plays grew, they were moved to outside performance venues and following a Papal ban forbidding clergy to act in public, were taken over by the town's guilds.

These plays represent some of the earliest examples of 'community theatre' in the world. Each section was generally performed by the most 'appropriate' guild. For example, the Goldsmith's Guild would take charge of presenting the story of the Three Kings - no doubt because they could most easily locate the required props!

We will be performing the following cycles: The Creation and the Fall of Man, The Annunciation, The Shepherds, Herod & the King and The Slaughter of the Innocents.