The show runs for 3 hours, with a 15min interval

a taut production ... strong performances - Jodi McAlister Theatre From the Back Seat 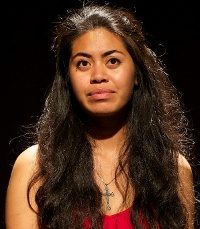 On Friday 30th November Kevin Jackson will be reading Bluebeard and Courcelles, with Con Costi reading these roles on Saturday 1st December. Roger Gimblett will be reading Robert and La Hire, with Marty O'Neill reading L'Advenu on both these dates.

At long last Bernard Shaw's masterpiece telling the extraordinary tale of Joan of Arc comes to the Genesian Stage in celebration of 600 years since the birth of Joan.

Saint Joan is the story of a country girl in her late teens who, inspired by God, declares her bloody mission to drive the English from France and to crown the reluctant Dauphin as King.

With staggering confidence, she takes command of the army and conducts a brutal campaign that leads to Charles VII's coronation. But she is soon regarded as a threat to both the fabric of feudal society and the Church across Europe. Within one year she is burnt at the stake.

Saint Joan was published not long after the canonization of Joan of Arc and dramatises what is known of her life based on the substantial records of her trial. Shaw studied the transcripts and in his preface to the play comments: "There are no villains in the piece... It is what men do at their best, with good intentions, and what normal men and women find that they must and will do in spite of their intentions, that really concern us."

Joan is the personification of the tragic heroine and the part is considered by actresses to be one of the most challenging of roles to interpret, often compared to the challenge of playing Hamlet. Notable St. Joans have included Jean Seberg, Sybil Thorndike, Joan Plowright, Lynn Redgrave, Judi Dench and Imogen Stubbs.

Although the play deals with dramatic and weighty subjects its brilliance is that it is also very funny and ultimately deeply moving.

The Genesian Theatre is delighted that Kevin Jackson has agreed to direct the production. Kevin is widely known for his inspiring work as one of Australia's most experienced acting teachers with years of experience at the National Institute of Dramatic Arts (NIDA) and the American Conservatory Theatre (ACT) in San Francisco. Kevin has long held an interest in the works of Shaw and we are absolutely delighted he has agreed to make his skills and knowledge available to us. We are also delighted to announce that rising young director Con Costi will be acting as Assistant to Kevin on this production.

This should be an unmissable entry in every theatre-goers diary. 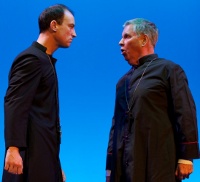 Join the Genesians in celebrating the 600th birthday of one of history's greatest women. There will be cake, bubbly and croissants on the house! So put on your party dress (or suit) and let the festivities begin! Celebrations will start at 7 pm before the play at 8 pm.

On Saturday 10th November 2012 the Genesian Theatre will donate 50% of all Box Office takings to Aid to the Church in Need. We encourage you to come along to help us support this worthwhile cause.