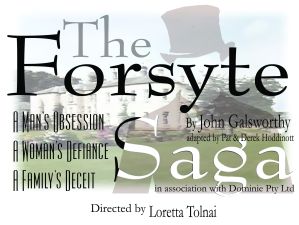 Adapted by Pat and Derek Hoddinott

The Forsyte Saga is the story of a large wealthy upper middle-class Victorian family, whose core values are wealth, property and propriety. The play focuses on Soames Forsyte, a very ambitious, conservative gentleman, who falls in love with and marries the beautiful and strong-willed, Irene. While Soames feels things deeply he is unable to express his emotions and his wife soon falls for another man, the young, idealistic architect, Bosinney. The affair tears the family apart and has repercussions through the generations that follow.

Opening at Sydney's Genesian Theatre on January 8, 2005, this new and exciting production of The Forsyte Saga will excite audiences at Sydney's oldest little theatre. The Genesian, celebrating its 60th anniversary, is well-known for staging fully-costumed, period epics. This production, based on John Galsworthy's three Forsyte novels, spans three generations from 1886 through to the roaring twenties.

Loretta Tolnai, director, believes that this season will have broad appeal, based on the popularity of the recent Granada television series which was recently aired on the ABC: "This is one of the truly great stories of English literature, set at a time when the world was rapidly changing at the beginning of the twentieth century. The production is bound to get audiences talking about society's expectations of women in the Victorian era and their changing status." She added "our experienced cast has brought to life the story's memorable characters, and audiences will be totally enthralled as the play reaches its moving and surprising conclusion."

The Forsyte Saga does more than expose the flaws at the core of polite English society - it is a timeless story of the conflict between the desire to possess and the need to be loved. 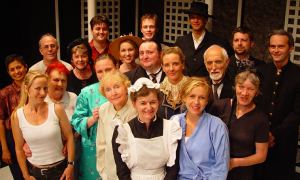