A repenting woman must have a bad dressmaker to be believed.

Oscar Wilde described his first play, 'Lady Windermere's Fan', as "one of those modern drawing-room plays with pink lampshades". This typical example of Wildean wit serves as an entree to this delightful satire of the morals of British society under Victoria.

Lady Windermere suspects her husband of an infidelity. She confronts him, but he insists on inviting his apparent paramour to his wife's birthday celebrations! Lady Windermere flees to take refuge with her friend Lord Darlington, and it is there that her husband discovers her discarded fan...

This was Oscar Wilde's first play, and its great success encouraged him to continue writing for the stage to become one of the most highly regarded playwrights of the Victorian era.

The Genesian Theatre's production is set in 1892 with traditional costuming and a talented cast of new and old faces to the Genesian stage. 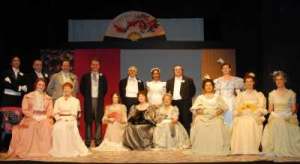